Thermography, or Thermal Imaging, or Thermographic testing is a non-contact, non-invasive, and hence non-destructive testing technique which is used to obtain thermal images of objects. These thermal images, also called thermograms, are colourful images depicting temperature distribution & variation on the surface of the test object. The variation in colour in different regions is an indication of corresponding temperature differences leading to flow of heat. Hence, hotter regions appear differently coloured than colder regions. This technique is based on the principle of Planck’s law of ‘black body radiation’ according to which every material above absolute zero (0 Kelvin) temperature emits infrared (IR) radiation, & the intensity of radiation depends on the temperature of surface emitting that radiation. This testing is accomplished using Infrared imaging cameras that can detect infrared radiations emitted by an object & convert them into visible images or thermograms. Such detections can indicate the thermal anomalies, also called ‘hot spots’ in any material substance and also in mechanical and electrical installation systems. Thermal imaging technology has become one of the most useful & valuable diagnostic tools for various industrial applications. It can detect & characterize any physical surface condition like voids, inclusions, de-laminations, crevices, cracks etc. by analyzing the differential heat flow patterns on the surfaces being tested. 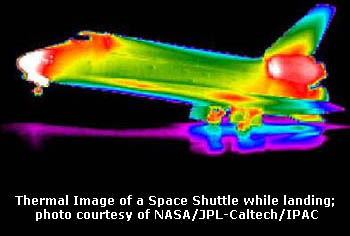 What are Infrared rays?

Infrared light is a substantial part or portion of the electromagnetic spectrum, and extends beyond the nominal red edge of the visible spectrum at 740 nm to 300 μm (or 300000 nm). It lies between the visible & the microwave region of the electromagnetic spectrum. Although human beings cannot detect IR light but they can realize it quite well. As per a scientific study, the nerve endings in human skin respond to temperature changes as small as 0.009 °C (0.0162 °F). This region of the spectrum can be divided into 3 sub-regions: near infrared (0.78 to 3 μm), mid infrared (3 to 50 μm), & far-infrared (50 to 1000 μm). The IR light is associated with the vibrational motion of molecules. The region from 8 to 15 μm is referred to as the ‘thermal imaging’ or ‘thermal infrared’ region, & is considered to be the optimum region for taking thermal images. The thermal imaging devices work best in this region. The credit of discovering IR radiation (in 1800) goes to a German astronomer Sir Frederick William Herschel, who measured the temperature differences of the spectrum created by making sunlight to pass through a prism & then based upon his observations concluded that the region beyond the red light marks the beginning of IR spectrum.

Working of a Thermal Imaging Camera

Infrared thermography involves transforming or converting an infrared image into a radiometric one, and then the temperature values can be read from the image. The infrared radiation or energy coming from a test object is captured by an IR detector after being focused by the optics. The information from the detector is then sent to the sensor electronic system for image processing. Finally, the data from the detectors get translated into an image which can be viewed in the viewfinder or on a standard video monitor.

Some basic advantages of thermographic testing can be summarized as follows:

Spectro Analytical Labs Pvt. Ltd. has been a pioneer service provider in the field of Non-destructive testing (NDT) for a long period of time. It comprises of an elite team of certified engineers who are not only well-trained & experienced in their respective field of work, but also possess a keen insight about the subject. Besides, Spectro possesses extremely modern & sophisticated thermal imaging instruments or cameras, which can provide superior quality thermal images because of finer details as a result of higher detector resolution. Hence, now Spectro can provide a highly improved & almost complete package of services in the field of NDT testing. In a nutshell, Spectro offers the following thermography services: