Metallography consists of the microscopic study of the structural characteristics of a metal or an alloy. The microstructure reveals the mechanical and thermal treatment of the metal and it is possible to predict its expected behaviour under a given set of conditions.

What is Banded Pearlite? How does it form and what is its effect on properties of steels?

Banding is inhomogeneous distribution of alloying elements or phases aligned in filaments or plates parallel to the direction of working. In rolled steel, the areas containing high phosphorus are elongated into bands, which are characterized by the absence of pearlite. These bands are weak owing to the absence of pearlite and presence of phosphorus. Ghost bands are due to local segregation of impurities during the solidification of the ingot; consequently inclusions are frequently present in the bands and dissolved oxygen also causes similar bands.

What is Widmansttaten Ferrite? How does it form and what is its effect on properties of steels?

Widmanstatten Structure – It is characterized by a geometrical pattern resulting from the formation of a new phase along certain crystallographic planes of the parent solid solution. The orientation of the lattice in the new phase is related crystallographically to the orientation of the lattice in the parent phase. Cause-In steels with carbon content upto 0.9%, when the rate of cooling is faster, the complete separation of the ferrite at the boundaries of large austenite grains is not possible, and ejection takes place within the crystal along certain planes (octahedral) forming a mesh like arrangement, which is Widmanstatten Structure.
Disadvantages-It has
low impact strength
low percentage elongation since the strong pearlite is isolated in ineffective patches by either weak ferrite or brittle cementite along which cracks can be readily propagated. Found in overheated steels and cast steels.
Remedy- The high Si-used in steel modifies it into a feathery structure. Control the austenite grain size by avoiding overheating or by refining the austenite grain size.

What is the importance of deoxidation in steels?

Importance of Deoxidation in steel – Since steel making is carried out under oxidizing conditions oxygen is bound to dissolve in steel. Solubility of oxygen in pure iron at 1600ºC is 0.23% and at 1800ºC is 0.48%. The oxygen content in iron varies inversely with the impurity contents. Hence at the end of refining period considerable amount of oxygen (0.05-0.1%) is left in liquid steel. If such steel is cast since the solid solubility of oxygen in pure iron is 0.003%, the excess oxygen is evolved in the form of gases leading to unsound casting. Therefore this excess oxygen need to be removed before casting. The removal of oxygen content of the steel is known as deoxidation or killing of steel.
Main deoxidisers are aluminium, silicon, Mn & C. Zr, Ti, B & V are costlier deoxidisers.

Non-metallic Inclusion - The oxide product of deoxidation reaction which remain as mechanically entrapped particles in steel are known as non-metallic inclusions.
Indigenous -Those arising in the course of steel making.
Exogenous - Those arising from mechanical erosion of contacting refractory lining.
Inclusions are non metallic & incongruent with the metal lattice & hence are undesirable.
Advantages –
Sulphur is added to improve machinability. Exogenous inclusions are used for dispersion strengthening of steels.

What is sigma phase and what are its disadvantages?

Sigma Phase- It is a Chromium/Molybdenum rich intermetallic phase found in the Fe-Cr-Mo system. It is intermetallic compound FeCr with a bcc lattice structure, which can dissolve small amounts of other elements. Sigma phase is formed when steel is heated or cooled in the range 550-1050ºC. It is a hard (800VPN), brittle, non-magnetic phase. It is formed from ferrite with a considerable diminution in volume which causes fine cracks in it.

Most cast irons contain phosphorus in amounts varying from 0.03 to 1.5%, which forms microconstituent steadite. Steadite occurs in white irons as a laminated constituent (ternary eutectic), consisting of :

The melting-point is in the region of 960ºC, consequently it is the last liquid to solidify and forms islands in the interstices of the dendrites. Phosphide eutectic is very brittle but it does not weaken the iron when present in small amounts, as it does not form continuous cells round the grains.
Increasing phosphorous from 0.45 to 2.58% in gray cast iron increases the amount of eutectic phosphide from 4.7 to 17.81%, weakens mechanical properties (tensile strength reduced from 297.5 to 184.1 MPa, impact strength from 4.3 to 2.7 J), increases hardness from 215.43 to 249.38 and lowers the eutectic temperature from 1139.7 to 1102.5 °C.

The special heat treatment given to medium carbon, high carbon and low alloy steels wire rod is called patenting. The process consists of heating the material well above the austenitizing temperature to ensure formation of homogeneous austenite. After soaking for sufficient time at this temperature, the steel is quenched in a bath maintained at a constant temperature. For a given steel, the quenching bath temperature is kept in the vicinity of the nose of TTT curve i.e. 450-550ºC. This results in transformation of austenite to fine pearlite. Lead bath or salt baths are commonly used for quenching the steel. The process is mainly used for wires, ropes and springs.suppliers.

What is the difference between hot working and cold working?

What is OPC Cement?

What is Intergranular Corrosion and how is it caused?

What is weld decay and knifeline attack?

Weld Decay - During welding the temperature of the parent metal is highest at the weld junction but it gradually decreases on both sides of the weld as we move away from the junction. At some point the weld thermal cycle brings part of the heat-affected zone into the sensitization range. Carbides precipitate and a zone becomes susceptible to Intergranular corrosion. This type of attack is called Weld Decay, low temperature heat affected zone corrosion.
Knife Line Attack – When steel is heated to a very high temperature (above 1230ºC) columbium and its carbides dissolve in the metal and remain in solution when the metal is subsequently heated in the chromium carbide precipitation range (550-850ºC) and columbium carbides do not form, and the steel sensitizes or behaves as though it were an unstabilized grade. This type of attack is called Knife line Attack.

What are inoculants and why are they added to cast irons?

Inoculants are modifiers added to white cast irons to cause the graphite to precipitate in all directions as spheroidal nodules during solidification of cast irons. Examples are magnesium and cerium. Magnesium increases the supercooling of cast iron and consequent chilling. Formation of white cast iron is avoided by double inoculation: magnesium additions make graphite nodular in shape and ferrosilicon promotes graphitization during solidification.

Which is better Gray Cast Iron or nodular Cast Iron and why?

What is Ni-hard and Ni-resist cast iron?

Ni-hard - Typical microstructure of white cast iron consists of iron carbide in pearlite matrix. Its hardness is 300-500BHN. Increasing the brittle iron carbide increases the hardness and wear-resistance of cast iron but impairs impact resistance. Addition of Nickel (3.5-6.5%) and chromium (1.5-9.0%) to cast iron gives a very good wear-resistant material whose microstructure consists of massive carbides in austenite-martensite matrix. Ni strengthens the matrix and adding chromium, which is a carbide stabilizer, counteracts the graphitizing effect of Ni. This wear-resistant material is Ni-hard cast iron.
Ni-resist – These are austenitic cast irons in which Ni content lies between 13.5 and 36%. Two type of Ni-resist cast iron are

What are the two methods of lowering the recrystallization temperature?

What are two methods of making a single crystal?

At the critical deformation, the grains wi
It is possible to grow very large grains by holding a sample for a long time high in the grain-growth region.

How does the addition of alloying elements change the recrystallization temperature?

Adding alloying elements raises the recrystallization temperature. They not only increase nucleation but also act as barrier to the growth of grains.

What is the effect of increasing cooling rate on

Why do annealed steels show a decrease in tensile strength above 0.8%C?

On annealing steels with carbon content above 0.8% , formation of brittle network of cementite occurs which causes a decrease in tensile strength.

What is critical cooling rate?

Why was Mn chosen as a substitute for Ni in the development of the 2XX series of stainless steels?

Shortage of Ni during World War II led to the substitution of Mn for Ni in the development of the 2XX series of stainless steels. The steels in which machining and severe forming characteristics are essential Mn is added to the steel as it reduces the rate of work hardening.

Why do some pots and pans have a copper bottom and Stainless steel inside? What type of SS are best suited for this application and why?

Copper bottom is for better conductivity of heat and SS inside due to better corrosion resistance.

What is the function of

What is Pitting Corrosion?

A metal can corrode without being in contact with another metal. In this case different areas of the metal take on different electrical potentials. This can occur because of variations in the metal metallurgical properties or because of variations in the surface oxide layer, such as a break, thinning, inclusion like mill scale, contaminant like dirt, etc.
In pitting corrosion the metal at the top of the pit has access to the oxygen in the air and becomes the cathode. At the bottom of the pit oxygen is depleted and the metal becomes the anode. The deeper the pit is the less the oxygen available at the bottom and the corrosion rate increases. Figure 2 shows the mechanism of pitting corrosion.
Composition rich in chromium and particularly molybdenum and nitrogen display higher resistance to this mode of corrosion. Solution of ferric chloride is used for laboratory testing of pitting corrosion. 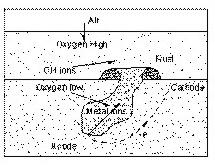 What is Crevice Corrosion?

A crevice is created whenever two objects are brought together. Unless they are perfectly flat a crevice is present and oxygen cannot easily enter the gap but is plentiful outside. Corrosion starts in the crevice because of differential aeration. Figure 3 is a drawing of crevice corrosion occurring under a layer of seawater

What information do we get from the impact test?

Quantitative results
The quantitative result of the impact test—the energy needed to fracture a material—can be used to measure the toughness of the material and the yield strength. Also, the strain rate may be studied and analyzed for its affect on fracture.
The ductile-brittle transition temperature (DBTT) may be derived from the temperature where the energy needed to fracture the material drastically changes. However, in practice there is no sharp transition and so it is difficult to obtain a precise transition temperature. An exact DBTT may be empirically derived in many ways: a specific absorbed energy, change in aspect of fracture (such as 50% of the area is cleavage), etc.
Qnalitative results
The qualitative results of the impact test can be used to determine the ductility of a material. If the material breaks on a flat plane, the fracture was brittle, and if the material breaks with jagged edges or shear lips, then the fracture was ductile. Usually a material does not break in just one way or the other, and thus comparing the jagged to flat surface areas of the fracture will give an estimate of the percentage of ductile and brittle fracture.

What is the effect of notch dimension in impact strength?

The notch in the sample affects the results of the impact test, thus it is necessary for the notch to be of a regular dimensions and geometry. The size of the sample can also affect results, since the dimensions determine whether or not the material is in plane strain. This difference can greatly affect