INSPECTOR PLUS to monitor and measure ionizing radiation. It can measure these radiations and has excellent sensitivity to low levels of alpha, beta, gamma, and x-rays.

There are three main kinds of ionising radiation:

Alpha particles and beta particles are not part of the electromagnetic spectrum; they are energetic particles as opposed to pure energy bundles (photons).

We can monitor radioactive waste sites, containers of imported scrap. We can also monitor radiation in handicrafts made from non inspected scrap material.

The waste are generally classified into following categories.

Category B covers solid waste and shielded sources with considerably higher activities of beta- or gamma-emitting radionuclides than Category A waste. Long-lived alpha-emitting radionuclides should be at relatively low levels. This category of waste typically comprises gauges and sealed sources used in industry, medical diagnostic and therapeutic sources or devices, and small items of contaminated equipment.

Category C covers solid waste containing alpha-, beta- or gamma-emitting radionuclides with activity concentrations similar to those for Category B. However, this waste typically will comprise bulk materials, such as those arising from downstream processing of radioactive minerals, significantly contaminated soils, or large individual items of contaminated plant or equipment for which conditioning would prove to be impractical.

Category S covers waste that does not meet the specifications of Categories A, B or C. Typically this category will comprise sealed sources, gauges or bulk waste which contains radionuclides at higher concentrations than are allowable under Categories A, B or C. Waste within Category S is unacceptable for near-surface disposal and must be retained in storage until an alternative disposal method is available. 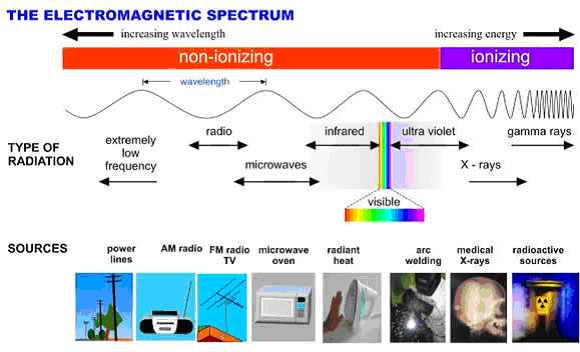 (Hz) represents one wavelength per second or one cycle per second. The range of frequencies within the electromagnetic spectrum is great resulting in the common use of a series of units:

What is non ionising radiation?

Non ionising radiation is found at the long wavelength end of the spectrum and may have enough energy to excite molecules and atoms causing then to vibrate faster. This is very obvious in a microwave oven where the radiation causes water molecules to vibrate faster creating heat.

Non ionising radiation ranges from extremely low frequency radiation, shown on the far left through the radiofrequency, microwave, and visible portions of the spectrum into the ultraviolet range.

What Is Ionising Radiation?

Shorter wavelength ultraviolet radiation begins to have enough energy to break chemical bonds. X-ray and gamma ray radiation, which are at the upper end of electromagnetic spectrum, have very high frequencies (in the range of 100 billion billion hertz) and very short wavelengths (1 million millionth of a metre). Radiation in this range has extremely high energy. It has enough energy to strip electrons from an atom or, in the case of very high-energy radiation, break up the nucleus of the atom.

The process in which an electron is given enough energy to break away from an atom is called ionization. This process results in the formation of two charged particles or ions: the molecule with a net positive charge, and the free electron with a negative charge.

Each ionisation releases energy which is absorbed by material surrounding the ionized atom. Compared to other types of radiation that may be absorbed, ionising radiation deposits a large amount of energy into a small area. In fact, the energy from one ionisation is more than enough energy to disrupt the chemical bond between two carbon atoms. All ionising radiation is capable, directly or indirectly, of removing electrons from most molecules.